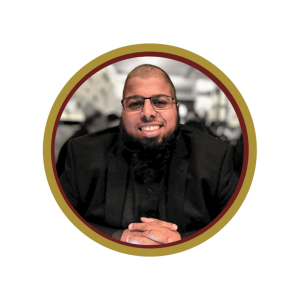 He memorised the Holy Qur’aan by the age of 11 at Quwwat ul Islam Masjid, London. He has studied Tajweed and Qiraa’ah in Egypt, Jordan & Morocco and is currently studying the Saba’ Qiraa’ah (7 Different ways of recital).

He is a qualified secondary school teacher and has vast experience of teaching in a school setting. Currently, he is employed as the Director of Learning for Religious Education and Civic & Community Leadership Coordinator at the Eden Girls school in Waltham Forest, London.
He has successfully completed an LLB (Hons) Law degree at the University of East London and undertook the Legal Practice Course at Leeds Metropolitan University. He is a qualified Solicitor by profession.

Qari Is’Haaq currently is a part-time Imaam at London Islamic Cultural Society in North London. He has also been invited to lead the Taraweeh prayers in Jordan, India, Morocco & Germany. Furthermore, he has taken part in various International Qur’aan Competitions around the world, notably in: Egypt, Jordan and Morocco, in which he has represented the UK.

He has deep passion and love for The Qur’aan and is always involved in organising Qiraa’ah events in London with International Reciters. He served as one of the Judges for the IQRA TV ‘Q Factor’ National Qur’aan Competition, the Alif Laam Meem Kids’ Quran competition hosted by Eman Channel in the month of Ramadan and is the Event Coordinator for the UK Qur’an Memorisation & Recitation competition, which is held annually by the National Huffadh Association UK.

Qari Is’Haaq is actively involved in organizing and judging other Qur’aan competitions across the UK. He has also recently established Quraan Movement UK, which is an online platform, aimed at involving youngsters and spreading the love of Qur’aan.

In terms of teaching Qur’an, Qari Is’Haaq has an extensive 15 years’ experience in teaching Hifdh classes across East London. Most recently, from 2016 – 2017, he served as the Principal of the North London Mosque Trust Madrasah and oversaw the development and progress of the Qur’an and Islamic Studies curriculum.

Furthermore, Qari Is’Haaq has been leading the Taraweeh prayers on an annual basis since 2001.
May The Almighty accept his efforts and take him from strength to strength.